The Tata Nano is almost discussed umpteen times in India . Today we are going to do a comparision between the Tata Nano and the India’s most dependable car that Maruti 800.

Yes. the Maruti 800 that revolutionised the Auto car industry of India during the late 80s and 90′ s still remains the largest selling car in India . The suzuki’s 796 cc engine gives us a powerful car that has an acceleration comparable to the Mahindra Scorpio when driven on a straight road.While the Optimised NANO ‘s 633 cc Engine is the smallest and cheapest engine for any car, the Maruti has an edge in delivering a substantial power with an engine which was originally designed by the Suzuki Japan ‘s marvellous technology. Thus w.r.t to matching a maruti and a Nano on a straight road, Maruti is a clear winner for its acceleration and High speed.
Coming to the exteriors and interiors of both the cars, the NANO ‘s exterior seems to be taller at 1.6m compared to the Maruti 800’s 1.4 m. The TATA nano boasts of a spacious legroom(Hallmark of all TATA cars) when compared to the Maruti 800 and is also wider(1.5) than the Maruti 800(1.44 m). With respect to the interior spacing , TATA Nano scores heavily . But one drawback os the NANO is that it doesnt provide any Boot space for the engine is located at the rear.Though Mathematically ,The Nano has 21% more interior space and an 8% smaller exterior, when compared with the Maruti 800. Maruti comes with a front engine and thus has a decent boot where once can keep all the stuff . 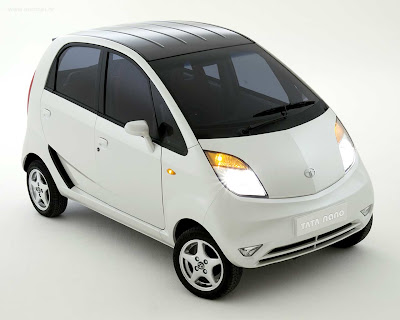 An important advantage of a front engine in Maruti 800 is that during any head on collision, the engine takes the majority of the impact and thus provides a safety barrrier to the occupants of the car . Hence most of the cars have front engines. Nano compromises on this fact to make space for the rear engine and occupants.Nevertheless ,the TATA Nano still has other safety features such as crumple zones, intrusion-resistant doors, seat-belts, strong seats and anchorages to protect its occupants during any collision.

Coming to the most important part is the pricing of both the cars. It is already known that TATA Nano is the cheapest car available with a base price of 1.4 lakhs. While the Base price of Maruti 800 is around 1.9 lakhs.There is a good gap of around 50-60000 rupee gap between both the models but it is evident that TATA Nano would give a stiff competition to Maruti 800 on the pricing front .It purely depends on the individual to make his / her choice of the vehicle but i would still certainly give a thums Up to Maruti 800 for its single handed supremacy in the Indian car market.

Tata Nano vs other rivals