3 years ago,when the world’s prominent manufacturers were still contemplating whether a car , so small, so cheap could ever be built, the drive to achieve the impossible was already present in the engineers of TATA Nano.Even as the leaders who ushered the revolutions of small cars, the Japanese themselves had not tread the road to manufacture the world’s cheapest car, TATA had decided to go ahead to build a Cost effective four wheeler. 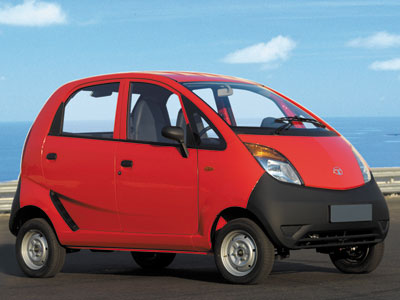 Roadblocks were plenty.The NANO manufacturing itself was in a jeopardy owing to the political disturbances in West Bengal (Where NANO’ manufacturing unit was planned).There were numerous challenges that the engineers had to face to cut down costs.Yet they had come up with a car that conforms to any standard tests of a four wheeler.The whole concept of producing an affordable car to the common man of India itself was a thought incredible enough to make NANO a reality.

It is known that the first inspiration of producing a car that could be affordable and cheap came directly from the common man of India itself. In India, it is common to see families of 4 travelling on a single two wheeler(A feat possible only in India). When Mr Tata, the CEO of Tata industries had seen that there are families in India that need a car to travel but cannot afford one, the concept of NANO was born to make sure that there ought to be a car for the masses. A car , that is cheap to buy but not cheap in its material, its technology nor its performance. Thus with the impeccable spirit of going for the best , Tata motors has finally achieved a feat that brought NANO’s emergence on a war footing.

The number of bookings on the first day to get a NANO speaks the incredible impact NANO is going to have on the Indian roads. The number of bookings were so high that there was a lottery system to deliver the first NANO cars. The proud Indians awaited the arrival of the NANO with bated breath .Although being the world’s cheapest car ,the NANO has turned out to be a big leap for the Indian automotive industry. The revolution has just begun and NANO has proved all its critics wrong .